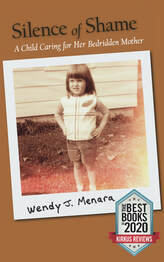 Named one of the best indie books of 2020 by Kirkus Reviews.
“Incisive, courageous writing in a vivid family account that proves both sensitive and challenging.”Starred Review (One of the most coveted designations in the book industry, the Kirkus Star marks books of exceptional merit)
~
As a retired family court judge "Silence of Shame" gave me brutal insight into what one family had to endure. I wish it had been available while I was still on the bench. It is an honest, compassionate work that should be required for court and social workers.
Retired Family Court Judge,
Joel Massie

In her debut memoir, Wendy J. Menara reveals the rare perspective of a child living in the shadow of death, caring for a chronically ill, mentally abusive, bedridden parent. She shares episodes of her life caring for her mother and the heartbreak at age thirteen of losing her mother.
By the time she entered first grade in the early 1970s, her parents had divorced, her father was rarely in her life, and her volatile, pain-wracked mother was bedridden with multiple sclerosis. With no other options, the optimistic child and her siblings fed, groomed, and cared for their mother’s deteriorating body.
Though her mother was abusive, Wendy refused to stop loving her. Only after her mother’s death would she discover damaging secrets and hidden identities that would change her world.
Told in vignette form, Wendy J. Menara's compassionate chronicle, Silence of Shame: A Child Caring for Her Bedridden Mother, is for those seeking insight into dysfunctional family relationships and weathering the challenges of caring for a loved one with a debilitating illness. But most of all, it’s a story of resilience—when the role of the caretaker and the cared for are prematurely reversed, there is no choice but to become a responsible adult long before growing up.

I absolutely loved this memoir. Evocative of one of my favorite books ever ("The Glass Castle" by Jeannette Walls). Silence of Shame is a powerful read that follows the bringing up of author Wendy Menara, from her childhood through her mother’s death as a preteen. Her relationship with her mother is the most examined one, and her mother leaps off the page as a troubled woman with internal conflict that simultaneously loves and lashes out at her children. Wendy’s turbulent childhood is packed with joyful moments and her relationships with those around her are lively and dynamic; but she also faces sorrow and tragedy in equal measure.
The book really is a testament to how one’s early life influences but doesn’t define a person’s life path, and how difficult times are a crucible for forming a strong woman. Silence of Shame also teaches lessons about living with disease, struggling through abusive relationships that are also at times loving, and the courage it takes to blossom during dark periods. Wendy doesn’t leave anything out of this unflinching memoir, and her attempt to leave no stone unturned and reveal all the shame and stigma her family faced pays off. There were moments that made me laugh and cry, and I will definitely be re-reading this again in the future.

More reviews
. . . Silence of Shame, poignant, evocative and spoken with the simple grace of a child's perspective of the struggles coping with daily life under challenging circumstances - K. Wegmeyer
Copyright 2020 Wendy J. Menara